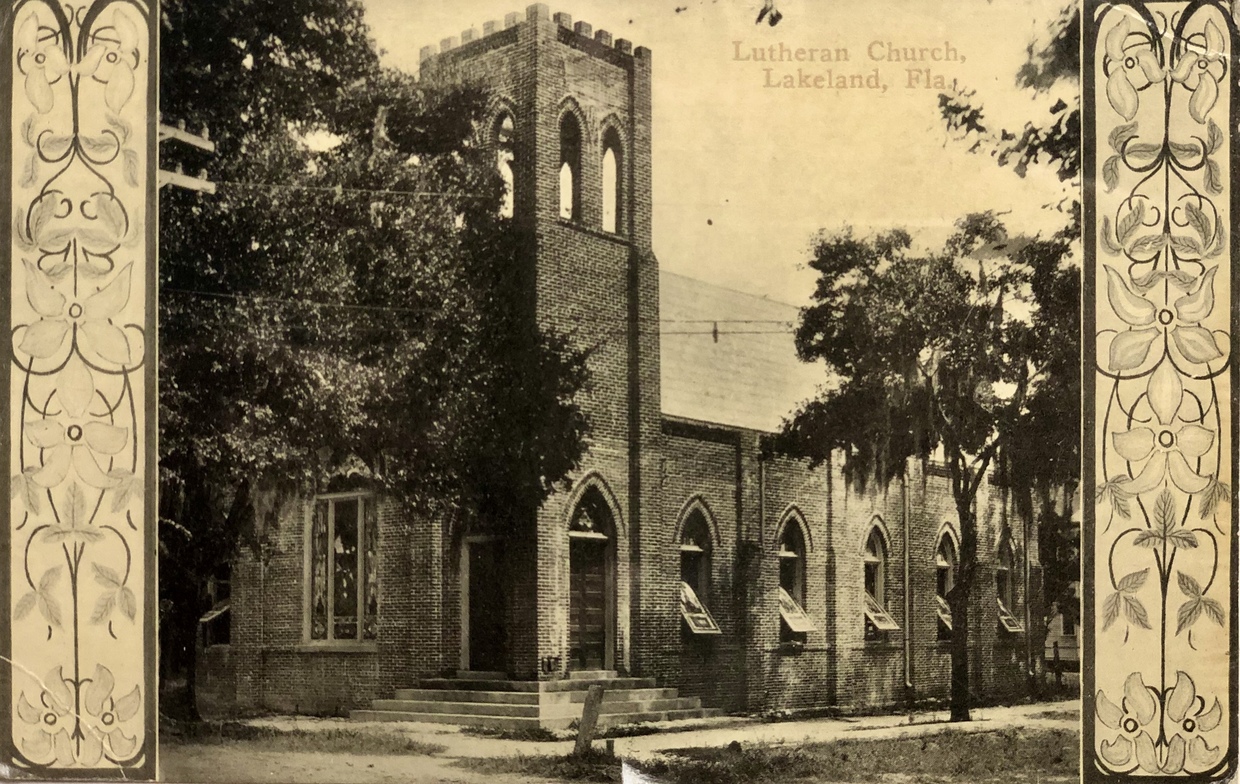 Almost 64 years have passed since the dedication of the present building on Ingraham Avenue which houses the congregation of Grace Evangelical Lutheran Church. The generosity and grace of this congregation have always been manifest. When we moved from our former location on the corner of Orange and Tennessee in 1956, pews and stained glass that we no longer needed were donated to St. Luke’s in Lake City, Florida.  In addition to St. Luke’s, Grace has donated generously to Reformation in North Lakeland and Iglesia Luterana Monte de Sion in Hialeah, and many other congregations as needs arise.

In 1908, a small group of pioneers led by Valentine Van Huss joined together to organize a Lutheran Church.  This small group of Lutherans organized officially on February 28, 1909.  Since this time Grace has had 21 pastors and a variety of organizing, supply, and interim pastors: from the first pastor to preach, the Rev. Herman Arndt, to our present pastor, the Rev. Pamela Smith.

In October of 1909 Grace was officially welcomed into the Synod of Georgia and Adjacent States, a part of the United Synod South, and welcomed H. J. Mathias as its first regular pastor.  In 1911 ground was broken for the first sanctuary downtown at Orange and Tennessee, and in 1912 the 53rd annual convention of the Synod of Georgia and Adjacent States was held in the new church, culminating with the laying of the cornerstone on October 21, 1912, the 395th anniversary of the Reformation.  Grace continued to be pivotal in the history of the Florida Synod, hosting the organizational meeting of the Florida Synod of the United Lutheran Church in America.

In 1915, the first Women’s Missionary Society was organized, 1937 saw the first Vacation Bible School, the church bulletin began in 1938, in 1944 the building was damaged in a hurricane, in the1950s the women of the church organized into three circles, and in 1953 the current site was purchased.  On January 1, 1956, ground was broken for the current church facility with the Rev. Royall Yount, president of the United Lutheran Church in America, Florida Synod, presiding.  Pastor Yount also preached for the 50th anniversary celebration in 1959.  In June of 1961 Grace celebrated its first ordination of a congregation member with the ordination of the Reverend Rollin G. Hansen, and on January 20, 2018, David Thoresen, another member of the congregation, was ordained and installed at Atonement Lutheran Church in Sebring, Fl.  Later another son of the congregation, Kevin Chinault, became an Associate in Ministry.  1969 saw the church mortgage paid off.  Mrs. C. V. (Lenora) McClurg donated the pipe organ in 1974 which was built by Jimmy Sawyers and Pastor Curtis.

Since the 75th anniversary in 1984, there have been many events in the Life of Grace.  They include among others the organization of the Early Childhood Education Center (discontinued around 2014), the renovation of the education wing and narthex, the renovation of the kitchen, and most recently the renovation of the worship area and fellowship hall with the addition of a magnificent cross crafted by the woodworkers at Talbot House.  In 2018 we sold almost half of our property to Florida Southern College for dormitory space and used part of that sale to pay off our renovation mortgage.

The congregation of Grace follows its mission to share God’s love with each other, our community and the world, striving to support community outreach and mission, following the word of the Lord, and sharing it with all as we depart from worship and into mission!

Subscribe to receive email updates with the latest news.